It was a sad day to see Maplin go into administration, but it certainly wasnt surprising - or if it was surprising, it was because it had lasted on the high street for so long.

I remember my first experience with Maplin, they were just a catalogue then, we as school kids were allowed to peruse the catalogue for hobby kits to build in DT. You'd get a box off all the components - and a few drops of solder on the desk later, something would spring forth. An electronic dice or a rudimentary burglar alarm - it didn't matter. What mattered was that there was a place where makers could get the bits they needed from.

Fast forward some years and Maplin was a shiny retail expreience no longer just the electronic components, but the completed electronics too. Never really the electronics that I was in the market for though. I wonder if we were all like that? Shopping at Maplin for the obscure bits we needed and avoiding the cheap imported electronics we didn't - there can't have been much margin in us 'makers' 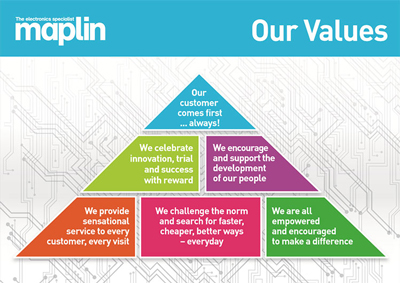 "The Customer is Always Right" wasn't coined to be used as a trite statement barked by customers at lowly retail assistants to excuse crappy behaviour. It runs deeper, the customer is the entity that will buy or not buy your goods - you can't make them buy what they don't want (although you can spend plenty on advertising to make them think they want it..)

The private equity company that owned Maplin at the time of entering administration was Rutland Partners identify the biggest factors as:

Now to me, number 3 is the the straw that broke the camel's back here. Too much stock and not enough cash. Its a shame that this is what caused Maplin to go down but it surely must have been evident sooner? Consumers won't buy what they don't want. Problem 2 is board room speak for "customers aren't buying our stuff but they aren't buying other people's stuff too so that's not really management's fault". If we treat problem 2 as rather "the customers don't want what we are selling", fix problem 2 filling the store with stuff the consumer does want and you'll have solved problem 3 straight off the bat.

Terribly bold statement there, thanks captain obvious, why didn't we think of that sooner? With little spare cash it is a gamble to run tests of new products that may well flop but not running tests at all is an even riskier gamble.

As a long time fan of Maplin it was clear a while ago that they had become a mish-mash of bits that seemed specialist, but were not. Perhaps they didn't know their market or perhaps they knew their market but wanted another group altogether? There were only so many Rolson tools that one could use once and break, before deciding that actually I'll get it off Amazon. I might spend a bit more and get a better one there, at least there is the option of an upgrade on Amazon, but at Maplin it was Rolson or nothing (not that I have anything against Rolson tools per se, they just don't stand up to tougher tasks).

Recent visits to Maplin felt the same as going back in to Tandy or Radio Shack. lots of stuff and none of it I need.

So if anyone can save Maplin, then great! Just make sure you sell what we want that we can't get on Amazon. Why not bring it full circle and offer maker sessions in store. We'll buy the kit from you and make it with others under supervision of expert staff. I've got two boys that I'd sign up tomorrow.